First version of Delve is available

So what exactly is Delve? Here is what Microsoft says:

Delve (Codename Oslo) & Office Graph
Delve (Codename Oslo) is the first experience to use the power of the Office Graph. Delve is a new way to search and discover content across Office 365 based on personalized insights. Delve will be available as a Windows 8 app, on mobile devices, and integrated in the Office 365 web experience. Office Graph is an underlying technology and a suite-wide intelligence fabric that will help you discover content and make new connections. The Office Graph analyzes signals and applies machine learning. Personalized insights are built up for each user, based on their behavior, their relationships to content, topics and one another. Content and signals are captured from Exchange Online, SharePoint Online, and Yammer.
Source: http://office.microsoft.com/en-us/products/office-365-roadmap-FX104343353.aspx

The Delve feature is located in the Office Bar at the top of the O365 site. Delve is only available for O365.

Delve shows content from SharePoint team sites and OneDrive for business content. In the future, we will see more content sources to push content to the Office Graph, such as email attachments, meetings, group content, video portal content, Yammer signals/shares etc. We will also see an API for Delve in the future. The API will probably be a REST-based API supporting CRUD operations.

Going to Query Editor in a search result webpart we can see a new Result Source: 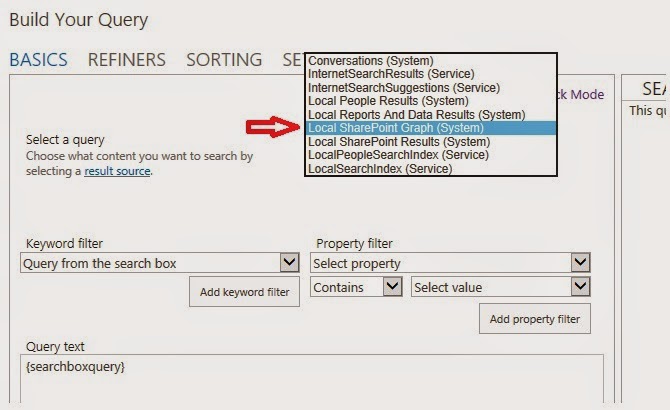 Aggregating all this in one page shows that the content is mostly related: 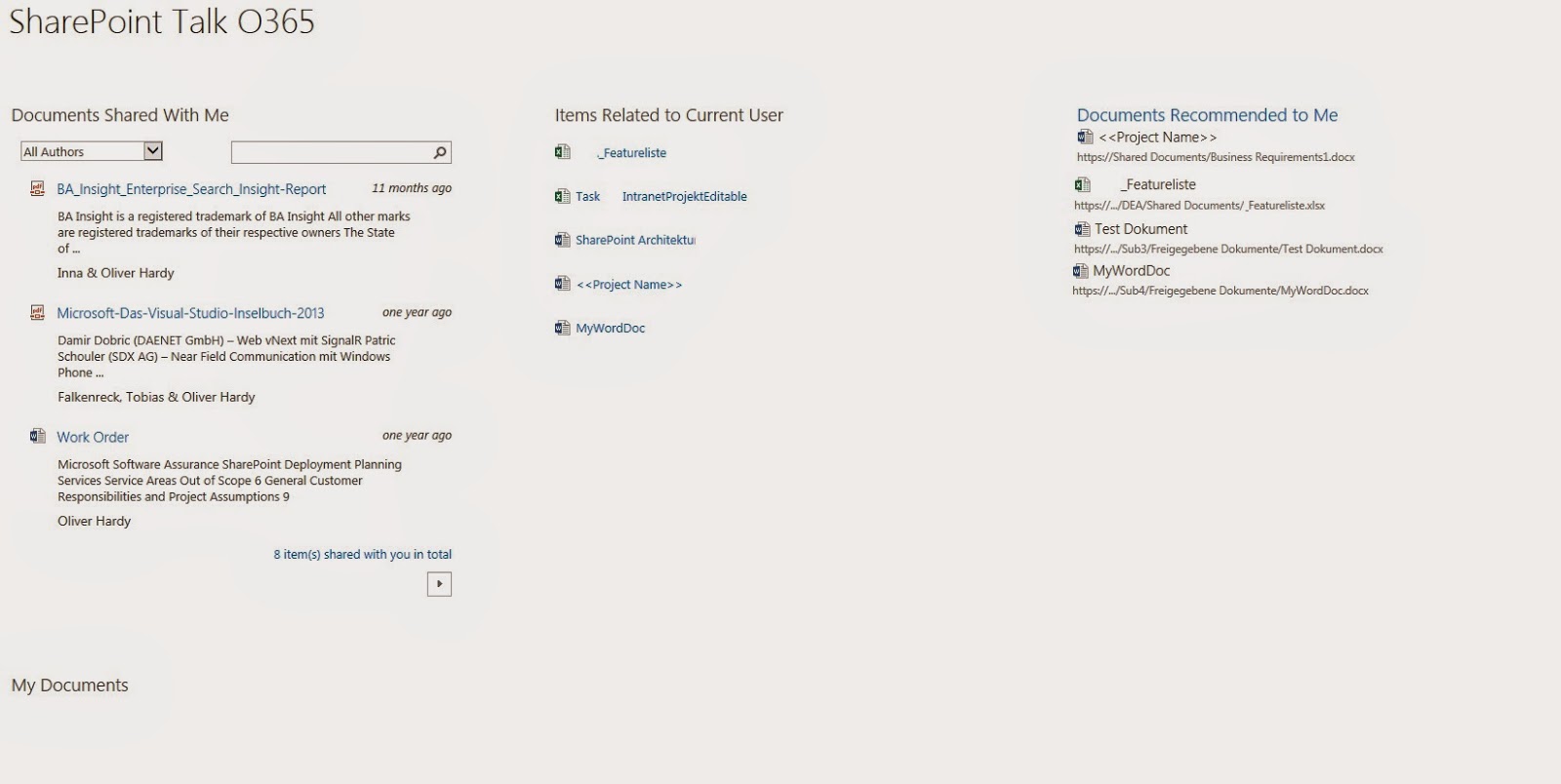 So is Delve only an aggregated view of all this? No it is not! Delve is based on the Office Graph, which is a kind of machine learning to map the relationships between people, content, and activity that occurs across Office 365.
To give you an idea how this works, let’s have a look at the following example.
As part of Google, we have an Analytics engine called Google Trends. http://www.google.com/trends/
I use this engine to get the following report.


Item to Item recommendation shows a correlation between this to search terms / items at the end of December every year – at New Year's Eve ;-) 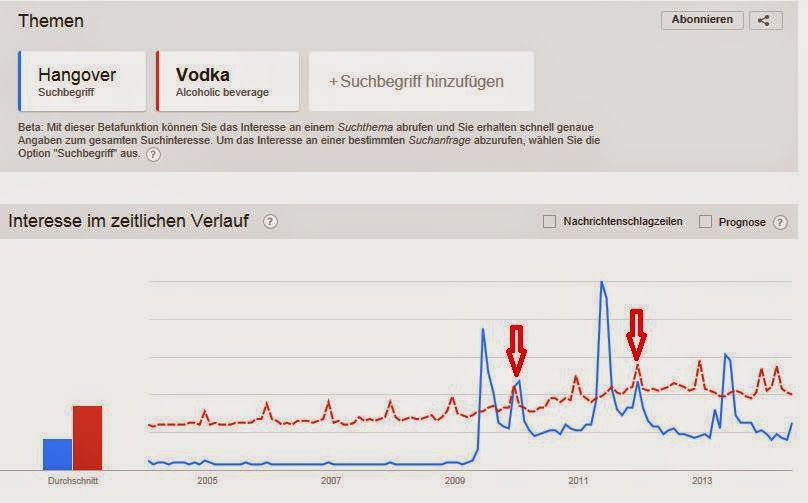 There is a correlation between these search terms and the date New Year’s Eve. In Delve it would be two people who are working both on the same document and because of this correlation, the system (Delve) is showing that document in the context of “trends around me.” The backend logig, algorithems and ranking models of Delve respect those correlations based on so called “signals” A signal for example is generated whene a user clicks on a document etc.  SharePoint Analytics works in a similar way. In SharePoint Analytics we talk about “events” which is the same like a “signal” in Delve / Office Graph. Both techniques are collecting, aggregation and analyzing what user are doing and is generating correlations  between content and content and users. Both solution Delve / Office Graph and SharePoint Analytics doing similar analytics but Delve is going a step forward and will soon also integrate Yammer and other components from O365.
To complete this, let’s have a look at how the SharePoint features like Items “Related to Current User” or “Suggested documents to follow” works.
“Items related to current user” is based on a result source. This result source can be used in a content search web part:

“Suggested documents to follow” is based on the managed property “recomendetfor” 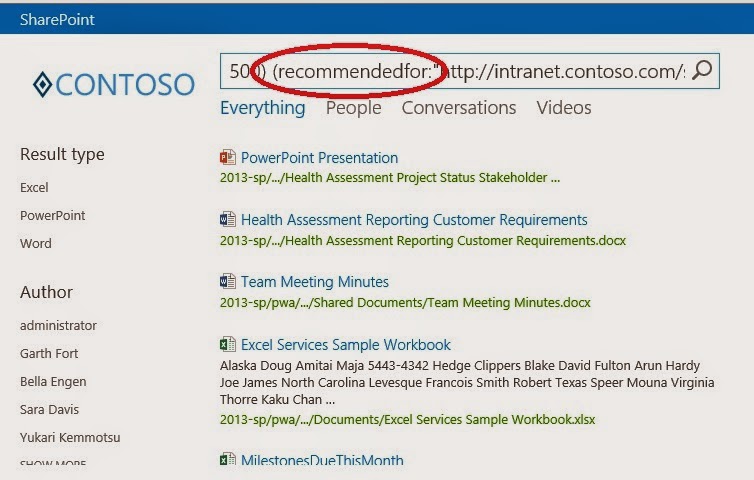 
When you add Delve on top of the traditional search results, this all can be a little bit confusing for end users and decision makers; a company needs a strategy for all of this. I think that Delve is the future of all these ideas and techniques. Delve will get an addition push with the upcoming Phone and Windows Apps, which allows us to get access to all this using mobile devices and without using the web interface of Office 365.
Again, you need more description here. How is this related to the bullet list above?
Belonging to comment NB5: Delve is new and not based on SharePoint Search or SharePoint Analytics feature. Delve had its own index and its own backend system the Office Graph. All this is not available in std. Search Driven Solutions build with  regular SharePoint Features like in the “Search Based” bullet list.
Keine Kommentare:
Diesen Post per E-Mail versendenBlogThis!In Twitter freigebenIn Facebook freigebenAuf Pinterest teilen
Tags: Delve, Office 365, OfficeGraph, Query Builder, Search Driven, SharePoint Online, SharePoint Search
Neuere Posts Ältere Posts Startseite
Abonnieren Posts (Atom)

Nicki Borell is the founder and the head behind the label "Xperts At Work", co-founder of Experts Inside and partner of atwork GmbH. He worked for many years in Microsoft enterprise environments and also as a trainer and consultant for SharePoint, Office 365 & Azure. His expertise extends from technical and strategic consulting all the way to project management, with his core competencies covering KMU, enterprise environments and government data management. Nicki is Microsoft Regional Director, MVP for Office Servers & Services, Microsoft P-Seller and professional Member of German Speaker Association e.V.